A tale set in the mountainous desert.

The White (Alfred A. Knopf)

Based on a captivity story from early America, The White is both adventure and meditation.

Larsen's memoir lets us into the hushed life of an American convent.

A narrative-lyric sequence based on the life of Matteo Ricci.

Blue smoke curled out of the taxicab windows.
The driver, who had just parked outside what looked like a stone mansion, waited... Three of us, three young women, sat in his Yellow Cab and smoked our cigarettes.
The mansion was the Motherhouse of the Sisters of Charity of the Blessed Virgin Mary. And this day, July 31, 1960, was Entrance Day, the day we would give our lives to God by joining the convent. About two weeks earlier, on the anniversary of the storming of the Bastille, on July 14, I had celebrated my nineteenth birthday.
Other taxicabs were pulling into the motherhouse like limousines to the Oscar awards or like horses to the Bar X corral. One hundred and eighteen of us wanted to become nuns.
Many of us were edgy and sat smoking and speculating a little, like starlets or cowpunchers before it was time to crush out the cigarettes or flick them away and do the next things that needed to be done.
Edgy, yes, we were—but also blithe to become nuns, just as Thomas More had been blithe to bare his neck and have his head neatly sliced off by the likes of the black-hooded executioner in A Man for All Seasons. Thomas was so chipper because he knew he was headed for God, would see God face-to-face. Robert Bolt has Thomas say—or maybe Thomas said it himself—that God "will not refuse one who is so blithe to go to him."

–from The Tulip and the Pope
"…Most of the chapters in The Tulip and the Pope are short -- some less than a page -- and, as their titles suggest, they often read like prose poems on religion and its occasional absurdities: "Black Becomes Us," "Joan of Arc's Kneecaps," "Gregorian Chant and the Congo," "Pajama Legs."
Larsen conjures up internal soliloquies -- the kind that must have been running in her head all the time she was in the convent -- so that readers are placed in the position of overhearing her dialogues between self and soul. Recalling the convent's ban on books, she says: "Surely you can do without your very own books for the rest of your life, can't you? You can do without the ones you fall asleep with, the ones that smell like a pulp mill or like mildew or the ones that smell like Belgian linen." Ultimately, Larsen couldn't do without those books; nor could she do without the "particular friendships" the convent forbade, nor cigarettes, nor colorful clothes, nor, in short, the wider world.
Without disparaging or sentimentalizing the convent world that once was her life, Larsen conveys its drowsy power. Much like my old Catholic grammar school -- which, according to neighborhood gossip, just escaped being placed on the cardinal's recent list of "schools-to-be-closed" in this era of downsizing -- the convent is, for Larsen, an enduring site of longing and dismay."
–Review Excerpt, Maureen Corrigan, The Washington Post 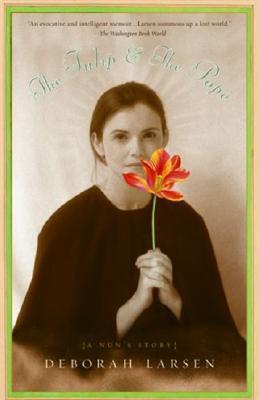 Advocates for published authors since 1912